At Bulldog Fire Apparatus, we are committed to connecting you with the industry-leading systems that protect the crews, patients, and passengers of the vehicles you purchase. This is why we recommend the new IMPACT Airbag System with RollTek™ technology by Braun Ambulances. Short for Interior Module Protection and Collision Technology, the IMPACT Airbag System is an option focused on enhancing occupant protection in every seating position in the module.

How does the IMPACT Airbag System work?

The IMPACT Airbag System is only effective when occupants are safely belted into their seats. Existing seating restraint systems in Braun ambulances already exceed industry requirements for frontal, side, and rear impacts, but the IMPACT Airbag system takes that one step further. Currently available as an option on select Braun models, this innovative solution contains three critical components:

For decades, Braun Ambulances has been on the leading edge of ambulance safety, and their vehicles are “Built for Life,” focusing on occupant protection for the crews, the patient, and passengers.

A Long-standing Commitment to Safety

Dedicated to developing cutting-edge innovations and driving industry standards, Braun has used testing throughout the years to validate their commitment to safety. In 2008, Braun surpassed by 300% the industry standard for roof and side load testing. Then, in 2016, they made history by conducting the industry’s first ambulance rollover crash test. Shortly thereafter, they took one ambulance first through a side-impact crash test and then a rollover test, seeking to replicate a real-world accident scenario. Today, Braun remains the only ambulance manufacturer to hit and roll the same ambulance module in testing. 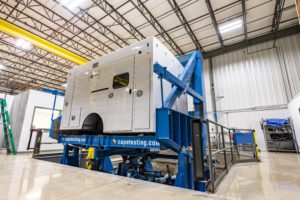 RollTek™ is a well-known name in airbag safety for fire apparatus and commercial trucks, and was developed by IMMI and tested through Cape.  RollTek™ was custom engineered as an option for Braun ambulance models and it works in the blink of an eye to reduce the potential for serious injury or death in the event of a side impact collision rollover.

The system includes a sensor that detects an unrecoverable rollover in a fraction of a second. In addition, two different types of airbags are deployed. An inflatable head curtain protects attendants from the inhalation area cabinet and the rear compartment (aft squad bench). Tubular structure airbags are used by the attendant, CPR, and fore squad bench positions for additional head, neck, and upper body protection.